Naming a dog is difficult. And critical. The name you choose will most likely be your children(s) password for the rest of eternity.* The New York Times even posted an article titled, “The Art of Naming a Dog“.

We grew up owning labs but when I was in college, my parents threw us a curveball** and bought a miniature teacup Yorkie from Texas. All five kids in my family have strong personalities and everyone had their own opinion of what the dog should be named. There were fights after fights. Our poor girl was nameless for weeks until one fateful Friday.

Her name is Beanie. Why, you ask? I’ll let my Mom explain:

At Nick’s little league game I was sitting on the sideline with all the other mothers. I had Beanie on my lap and was feeding her vitamins with a syringe [WTF?!]. A line drive beaned her on the head and she was thrown from my lap. Picked her up…she was limp and her tongue hanging out. Of course, I burst into tears. A father drove me to the vet and the Doctor said she wouldn’t make it….14 years later, she’s still going strong.

If you were able to read past the “feeding her vitamins with a syringe” line then you’ll understand where her name came from…. 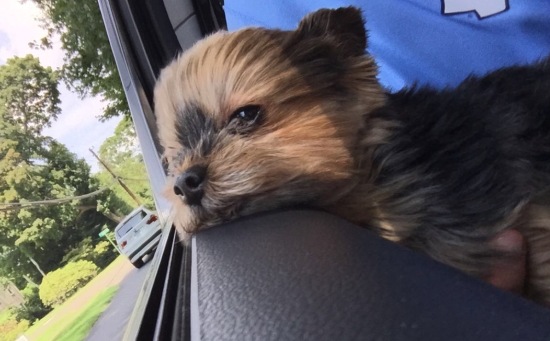 “it ain’t over til it’s over” – beanie berra

A baseball pitch that hits or nearly hits the batter’s head and is sometimes used to intimidate the batter.

The odds of Beanie getting hit in the head by a rogue baseball were 1 in a million. Literally. She weighed one pound and my mom claims that if she had put her on home plate and given each boys 10 balls to try and hit her no one would have come close.

To any passerby, the name Beanie may sound trite but once you hear the story, we were clearly only left with one choice. It’s like they say in baseball, life begins when the season starts.

*I changed my passwords before posting this. RIP CHESS DOG.
** See what I did there?