This Gawker article made me laugh out loud (remember this video?): 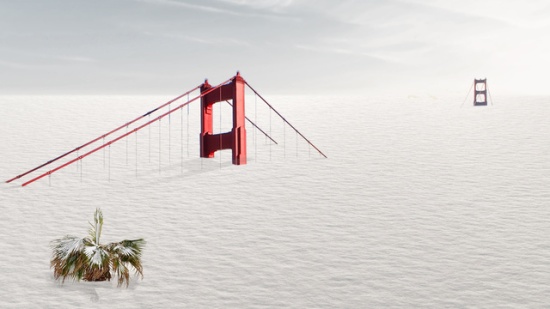 From the Rocky Mountains to the East Coast, America is struggling with ice storms and blizzards and general misery. The winter weather has been especially tough on Californians. Many of us don’t own gloves, or forgot where we put them several years ago after we got home from Mammoth or Tahoe. Few of us have those scrapey things to get frost off the windshield—frost!—but I have witnessed our brave people making do with their credit cards or even the edges of their phones, which is probably not recommended by the manufacturer. But what do we know of frozen water outside? Frozen water goes in margaritas! Yet we are surviving this unusually chilly weather, together and mostly apart, like usual.

In the San Francisco Bay Area, nighttime temperatures have actually dropped to freezing levels for the first time that anyone can recall. There are reports of our year-round herb and tomato gardens having a tough time, and many desperate residents have been forced to bring the plants inside or plug in one of those little space heaters in the garden.

Children have no idea what to do. Most of them have been taught since they were toddlers to “layer,” meaning to let their parents dress them in a very light jacket or sweater which is immediately lost on the playground by first recess. What are the school kids to do at secondrecess, when it’s still a bit cold out?

Local dogs are uncharacteristically angry and unpleasantly constipated, as their keepers refuse to go on the usual walks due to the brutal temperatures that have already dropped to the 40s, the 30s and even the 20s. Local cats have been kept indoors, too, limiting their usual ecological niche of wiping out all songbirds and crapping in the wood chips we use for landscaping purposes.

Office workers find they have no proper overcoat to go with “business casual” or whatever people wear to offices these days. (Tech workers, being the most terribly dressed people to ever earn six figures, have no qualms about wearing their wookiee costumes or even sleeping bags as they await their private buses to Facebook and Google in temperatures cold enough to even see your own breath.)

What’s next for California? There is the usual snow in the mountains, where it belongs, and light drizzle is predicted for many coastal areas. Whatever winter crops are growing will continue to see some damage through the weekend, which California’s agricultural industry will inevitably blame on Nancy Pelosi.

But by next week, we will begin to rebuild. We are a resilient people, and we will come back even stronger, even more determined to continue doing whatever we do, such as wearing yoga pants and T-shirts outside at Christmastime, and watering our lawns, which are still green, because this is the Earthly Paradise that Columbus dreamed of, and that’s why more people live in California than any other U.S. state.

We may be shallow, but we’re not stupid.

Many thanks to hearty red wine, Uber and my new heating pad from Walgreens for getting me through this week. Even my Dad who was in town from Connecticut was chilled to the bone. Please note his winter hat, down jacket and one million blankets below: